Archive of National Democratic Front of the Philippines

Today, September 21, 2018 let us commemorate the 46th anniversary of the declaration of the dictator Marcos’ martial law by strengthening our fight against Duterte’s martial law in Mindanao and its widespread tyranny elsewhere in the Philippines. Let the sacrifice of hundreds of martyrs of the 20 year Marcos dictatorship and current martial law in […]

On the 10th death anniversary of Comrade Rachelle Mae Palang

A Woman Unbound by Struggle Kabataang Makabayan – Cebu Chapter – Rachelle Mae Palang command commemorates the 10th death anniversary of its namesake with a red salute. Ka Rachelle continues to be an inspiration to the Filipino youth to join and take part in the National Democratic Revolution. Ka Rachelle was a student leader and […]

In the aftermath of typhoon Ompong’s wrath, the small-scale miners in Bgy. Ucab, Itogon, Benguet fell victim to a landslide that left more than 40 people dead and more than 60 others still missing. President Duterte as usual goes into doublespeak mode again, saying that all mining operations, small-scale or large-scale should be stopped, but […] 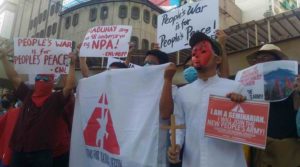 We, the Christians for National Liberation – Metro Manila (CNL-MM) joins the Filipino people in acclaiming the leadership and lay faithful of the Iglesia Filipina Independiente (IFI) or Aglipyan Church as this nationalist church celebrates its 116th Proclamation Anniversary. The “Ama sumilang nawa ang aming pagsasarili” is a call to national liberation in the context […]