an open letter Pasabilis! Feature | To a Prodigal Son of the People’s War

I’m glad you’re alive. I saw a picture of you on one PNA article; no haircut, new eyeglasses (I hope), and a raised eyebrow that ironically contrasted with your bright smile. Maybe that smile was your way of thanking the soldiers who managed to save your life. Or perhaps it’s a ruse for them to think you’ve actually turned your back on us. Nevertheless, you seem well.

Well enough to appear on one of NTF-ELCAC’s press conferences, with its loud mouthpiece, Lorraine Badoy. I also saw that video documentary featuring you, your “disarming realizations,” and this “pointless” struggle. It could be the bad editing job but I rather thought you seemed bored, like someone trying to not appear reading from an idiot board.

Having known you, it just didn’t seem genuine. You have a way with words that didn’t come off in that interview. You didn’t seem convinced. It was well rehearsed and all, but your creativity and sharp wit didn’t really shine through the words that came straight out of the NTF-ELCAC’s chest of trite diatribes. Especially that part where you had your pouring out against the comrades who left you behind.

But one little fact was downplayed in the story. Perhaps the enemy’s stringent editing prowess found it a little too contradictory. A comrade did stay with you and tried to save your life.

Funny, she initially tied the green silk shawl (the one that Baba gave you) around your left thigh where she first saw the blood stains, when in fact the injury was on the right. She didn’t notice at first, because you were wearing that black Lagalag pants you seldom wore. It was when you croaked, “It’s not there…” that she finally saw the bullet entry wound in the middle of your right thigh, mercifully just below the bone. And so she quickly untied the improvised tourniquet, and wound it again around the injured part. That green shawl made it to the dramatic opening scene of your documentary, and she liked to think that that probably helped stem the bleeding before the enemy got to you and administered better aid.

The bleeding wasn’t profuse, but she could see you were in pain. She asked if you can manage to crawl, but you said you couldn’t, so she tried to pull you up and drag you. She was barely able to move you. You cried in pain, gasped for air, and lost consciousness. She swerved her head around to see if there was anybody who could help, only to realize that she was the only one left.

So it was a toss-up. But she had to decide: stay and be captured or be killed (which either way wouldn’t have made any difference on your situation), or leave. It wasn’t an easy decision to make; choosing between you, her life, and the lives of the comrades still being pursued by the enemy.

She gathered all that’s left of her strength, courage, and determination, and soldiered on with one of the most difficult decisions she ever had to make in her life. With a heavy heart, she left you. She chose to fight another day. How she managed to survive, alone for more than a fortnight, with almost no food or water, was a different story altogether. Had it not been for what happened to you afterwards, you would have been thrilled to hear that particular saga, as you’ve always liked survival stories. Eventually, with the help of the masses, she did manage to find her way back to the comrades.

Yes, in the heat of the battle, during those minutes when you teetered beetween life and death, some comrades did pass you by or wasn’t able to get to you fast enough to take you out of the firing line. But one did. That comrade could’ve done more, but under the circumstances, it was the most that she could do. She is sorry that you feel she and the others failed you. She will remember that day for the rest of her life.

And yes, you’ve been saved by the enemy. But do you ever wonder that if it hadn’t been you, if it hadn’t been the perfect chance for media mileage, those soldiers would still have done exactly the same thing? What about the other comrades who, despite being old, sick, unarmed, or wounded, still suffered gruesome deaths in the enemy’s hands?

What about Bok, whom the enemy most certainly captured defenseless, made to suffer his injuries and disappeared him for 12 days before finally, victoriously declaring him “neutralized?” (I really hate that word.) What about the many lowly, unarmed peasants whom they inadvertently killed and later misrepresented as NPA fighters in order to save face? Your being saved by the enemy was an outlier, and I know you know that it did them more good than it did you.

I am sorry that you are currently at the fickle mercy of the enemy, and I can only imagine the pressure and suffering it is causing you. Not because you actually believe the trash you sluggishly claim you “disarmingly realized,” but that you’re only doing so in order to survive and keep your head above water.

The universal truth of the class struggle and the need for people’s war cannot be so easily disarmed from someone as brilliant as you.

I know you know this already but sometimes we need to be reminded. We may have lost some battles, but the war is far from over. And as one of the comrades close to you once said, we should not be afraid of a life full of difficulties and hardships, but of a life without meaning and purpose. From the onset, we have always been taught that the life of struggle, within this tumultuous struggle, is never easy. But it is a meaningful life, and it is never pointless.

Do take care of yourself. I still harbor the dream of you finding your way back to the struggle. In the meantime, I hope you’re safe inside the lion’s den. 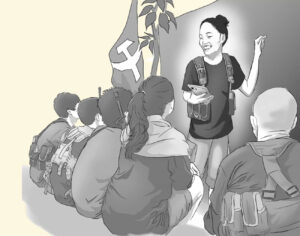